What is Canada’s media moonshot? Media policy expert Dr. Irene S. Berkowitz presents ten takeaways from a workshop in Silicon Valley on how emerging technologies are disrupting and transforming industries.

Media was scarcely discussed during Singularity University’s Executive Program, a workshop looking at the impact of cutting-edge technologies on industries, even though a bunch of policy wonks among the 95 participants from 35 countries (including myself) were obsessing over such questions.

Disruptions to everything will create trillions of dollars of commercial opportunity. Just ask the speakers at Singularity U, many unicorn founders—which in Silicon-speak are start-ups valued at a billion dollars before going public.

What is happening and why now?

At Singularity, we learned the theory of industry 4.0: what and why? The simple answer is that we are at the knee of an exponential curve. But let me unpack that just a bit…

In 1965, an iconic paper by Gordon Moore observed that digital technology progresses exponentially, not linearly.

In 2001, Moore’s Law was adapted by futurist/scientist Ray Kurzweil (now Google exec and Singularity University co-founder) as the Law of Accelerating Returns (LOAR), which demonstrates that once digitized, all information hops onto an exponential curve. The ratio of performance to price doubles about every 18 months. Exponential progress is the root of Silicon Valley’s famous slogan: faster, cheaper, easier.

They showed us the stunning differential between linear and exponential progress. Thirty linear steps take you across the room. Thirty doublings take you to a billion, or 26 times around Earth. Here’s where the knee of the curve comes into play. Exponential growth starts out flat (2 x 2, 4 x 2, 8 x 2 and so forth), then shoots skyward. The inflection is the knee. Industry 4.0 is exploding because we have arrived at the knee of the exponential curve. 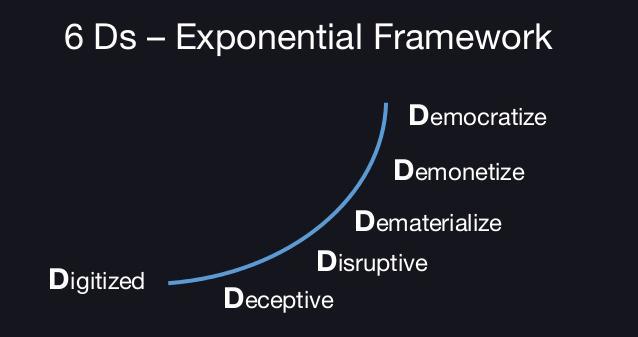 An obvious example of the 6Ds is your very own smartphone. It’s millions of times faster than all of NASA’s combined computing power in 1969. It holds all the world’s information in your pocket, updates in real time, and has disrupted, demonetized, dematerialized, and democratized clocks, calendars, cameras, maps, mail, books, newspapers, radios, TV, taxis, and oh yeah, phones!

While capacity doubles, price plummets. For example, the cost of genome sequencing dropped 10,000 times in 7 years. Solar cells are a great example of 6Ds in action: their price only dropped 200 times in 20 years, then lost 50% in the last 16 months. Solar technology has entered the knee of the curve.

When I first returned from Silicon Valley, I was bummed out about our upcoming digital media consultation. Oh no, we’re a decade too late! Then I realized that our timing was perfect! We now know where the puck is going and can skate there. (Yes, they really do quote Gretzky in Silicon Valley!)

One place where the proverbial media puck is heading is toward the global monetization of popular content. Connecting via powerful stories that make us laugh, cry or deeply ponder remains fundamental to human experience.

Our government has long noted that stories are close to the heart of human culture. As such, drama has been the proper focus of Canada’s public investments in audiovisual content. Going forward, if our stories move even a fraction of the more than 3 billion people online (3 to 5 billion more shall be getting onboard by 2020), our system should be reaping in the profits.

However, Canadian drama is not yet popular enough to deeply connect with a large enough audience. I’ve spent a decade examining this issue, and filtered my heady experience at Singularity University through this lens.

Here are ten key takeaways from Singularity University’s Executive Program and how they might inform Canada’s upcoming media mission:

9. All Exponential Organizations start with a MTP, or Massive Transformative Purpose.
When it comes to premium entertainment, the MTP of our entertainment media seems easy: to entertain. Are we meeting, or exceeding, that goal?

8. Moonshot thinking required.
Moonshots are the wild, bold peak of imagination. If we dare to think it, we can make it happen. Who would have thought software would ever eat away at the taxi business?

6. All market power derives from attention.
Global is the new local. Yes, Internet turns (old economy) fee into free, but if you follow digital era money, there are billions in access and devices.

5. Beam Me Up Scotty has arrived.
Pokémon GO is a teaser for the coming tsunami of disruption. Artificial intelligence, augmented reality, and virtual reality may dematerialize our devices, devastate our need for air travel, alter education, medicine, money, and much else. At Singularity, I sat in a 3D printed car. I watched a demo of holoportation, clearly the arrival of Star Trek’s “Beam Me Up Scotty.”

4. Long lens required.
As everything turns into media, we must ensure our new framework has sufficient perspective to ensure universal access to the Internet and security as never before. As was said at Singularity, we need a “Manhattan Project” for security. But it would be top secret, so maybe we have one? (Book alert: Future Crimes by Singularity’s Mark Goodman).

3. And then there’s The Singularity.
Ray Kurzweil observes that humans haven’t had an upgrade in 50,000 years and says we’re due. If we are anywhere close to an evolutionary juncture, where computing power will equal human brainpower, let’s adapt our entertainment policy soon, while analog humans still need it! (Book alert: The Singularity).

2. The best way to predict the future is to create it.
This seems self-explanatory, but they stress it at Singularity. You can never hear it enough.

1. Policy is powerful, but time to course correct is compressing.
We need a policy outcome that can withstand change that is so fast, it’s disrupt or be disrupted. The role of regulation in this ecosystem was so top of mind, I found it scrawled on an easel in the Singularity courtyard. 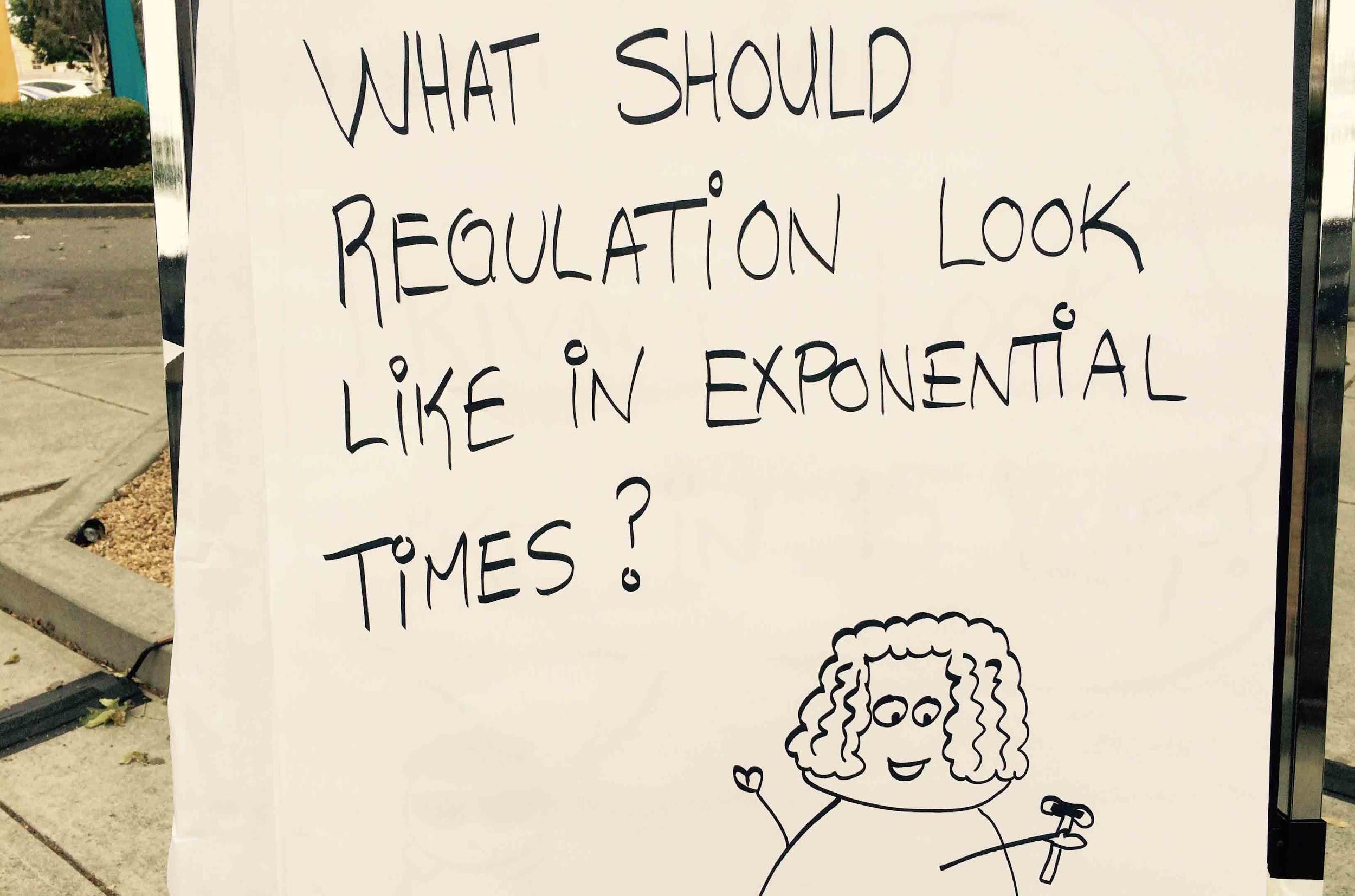 Silicon Valley icon Mark Andreessen has asserted that software is eating the world. I returned shocked and awed by the nature of this feast. It seems clear to me now that media was the hors d’oeuvre, a bite-sized, cocktail party digitization, maybe even boring from the perspective of what will be disrupted in the coming years. The main course has hardly begun.

Industry 4.0 is moving at a dizzying pace, and Canada isn’t the only country tackling these issues. So let’s be leaders.

Further to Prime Minister Justin Trudeau’s remarks earlier this year at the World Economic Forum, we could position media transformation as outward facing resourcefulness, and re-brand Canada as a global nexus of innovation. Now would be Canada’s media moment to exponentially shine.

Dr. Irene S. Berkowitz, is an MBA instructor at the Ted Rogers School of Management, and a senior research associate in Ryerson University’s Media Innovation Research Lab. Her doctoral dissertation on Canadian media policy received national recognition during the CRTC’s “Let’s Talk TV” initiative. As a leading thinker, her opinions are often sought by the media, including The Globe and Mail, Playback, BNN, Sirius XM, and the CBC. Dr. Berkowitz holds a PhD from Ryerson University, an MA from the University of Chicago, and a BA from Cornell University.
Read Bio
Related articles

6 Takeaways from the first 6 episodes of Now & Next 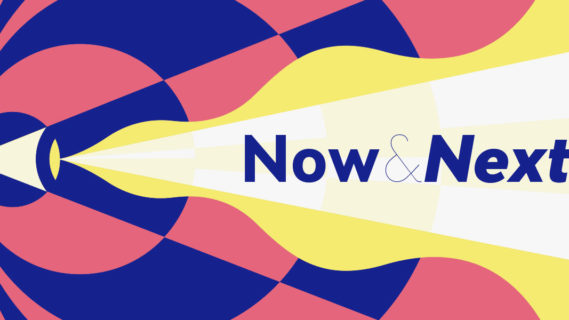 When Scandinavian start-ups compete against the giants of...

Read more
Jan 18, 2019 / Méta-Media
We use cookies on our website to give you the most relevant experience by remembering your preferences and repeat visits. By clicking “Accept”, you consent to the use of ALL the cookies.
Cookie settingsACCEPT
Manage consent