Whereas Canadian horror films are renowned throughout the world since David Cronenberg produced his first works back in the 1970s, Quebec has still not managed to build up a strong reputation in this genre.

It is in this context that La Maison de prod, a Montreal-based independent production company, approached the development, production and promotion of Ravenous, a zombie drama directed by Robin Aubert that flirts with the alternative cinema, bloody thriller, and schoolboy comedy genres all at once.

Franco-Quebec Horror: a Genre to be Conquered

In any given year, horror films are a sure bet for box offices in Canada and abroad. In fact, 2017 turned out to be a record-breaking year in terms of revenue and the exceptional recognition awarded to Get Out and It—two films that contributed to establishing horror as a mainstream genre once and for all.

In Quebec, American horror films are very popular both in theatres and on video-on-demand (VOD) platforms the likes of Netflix. However, the reality is completely different for Franco-Quebec cinema despite catalysts such as the Fantasia and SPASM festivals.

As an example, it took 12 years before director Robin Aubert, whose career took off with the fantasy film Saints-Martyrs-des-Damnés, was able to go back to genre cinema.

The aim was to create a socio-support campaign based on the crowdspeaking principle and develop a community of Quebec horror film fans to generate a significant number of “Likes” as well as followers, tags, shares and retweets on social networks.

By the end of this six-month campaign, BeauRobot had collected statistical data on frequency and subscriptions and produced a report that La Maison de prod presented to the funders for the production stage.

Here are the results:

The decisions made to refocus subsequent interventions on Facebook rather than Twitter and to use the newsletter to reach fans directly were also based on these results.

It was interesting to observe how the fan community reacted in the following months, after various media announcements regarding the project and more particularly the unveiling of the distribution. 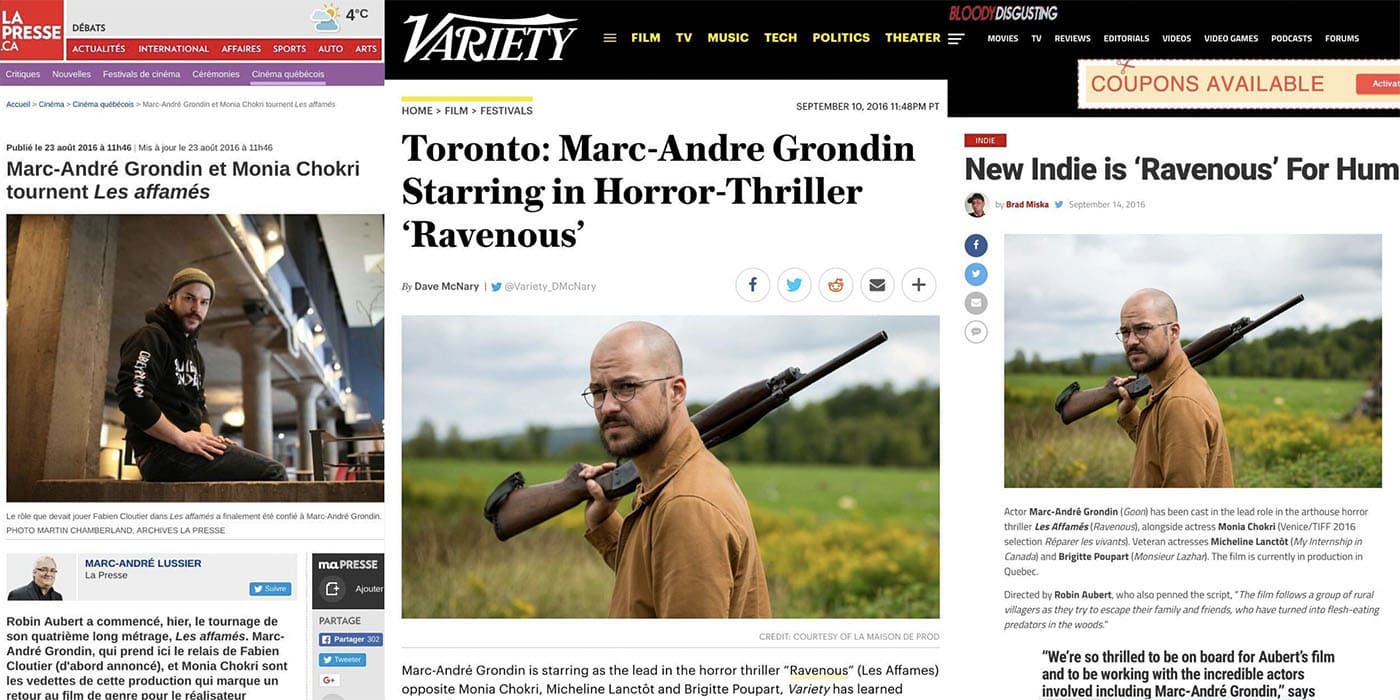 The announcement of the participation of renowned actor Marc-André Grondin (Goon, Che, C.R.A.Z.Y.) revealed the fact that female subscribers to the Facebook page were more likely to like, comment and share the news. It’s a strong tendency that was also observed during subsequent production stages.

A high point was also observed on Twitter following the announcement published in specialized publications like Variety and Screen International as well as websites and blogs specialized in horror like Bloody Disgusting (135,000 followers) and Dread Central.

This was the main platform used to reach potential fans outside Quebec during the film’s festival tour (2017–2018).

Upstream of the film’s world premiere at the Toronto International Film Festival (TIFF), an exclusive excerpt was distributed through the Entertainment Weekly website as well as in Quebec. The excerpt presented information on the film’s release dates in theatres as well as the film’s various social network accounts.

The award for the best Canadian feature film at the TIFF and the initial reviews of the film, which echoed the preponderant role played by women in Ravenous, a rare phenomenon when it comes to horror films, encouraged the distributor—Christal Films/eOne—to focus their strategy on promotional items that showcased the female characters.

The best marketing strategy for each social media platform

The number of views each promotional video received reveals the following:

COMPARATIVE TABLE OF USERS BY PLATFORM

Two types of fan-generated content were used to reach other segments of the large web community of horror film fans who had not been targeted by the initial deployment strategy: video reviews on YouTube and live-tweeting sessions on the film following its release on Netflix.

Despite the modest results obtained, it will nevertheless be interesting to plan and incorporate this type of promotional content in collaboration with these additional influencers in the future.

Seven major websites published the aggregate results of film reviews made by Internet users and critics. Here are the results:

Based on these indicators, La Maison de prod arrived at the following conclusions:

In retrospect, the Les Affamés adventure made it possible to test and assess a variety of online tools and platforms to better decipher how audiences had understood and appreciated the film on the basis of their viewing habits and the sites they visited.

Although each film requires its own strategy, it would appear that, when used reasonably, these tools make it possible to plan the production’s social marketing on more solid bases by taking into account the following recommendations:

Canada Media Fund invests over $40M in the development...

Social media for kids: a growing need for virtual...

Read more
Nov 10, 2020 / Prune Lieutier
We use cookies on our website to give you the most relevant experience by remembering your preferences and repeat visits. By clicking “Accept”, you consent to the use of ALL the cookies.
Cookie settingsACCEPT
Manage consent