What makes Canada digitally unique according to comScore? Our love for desktops, tablets and entertainment apps…

We learn that, compared to the US, the UK, France, Italy, Spain, Argentina, Brazil, Mexico, India, Indonesia and Malaysia, Canada presents a market that has several unique characteristics.

Here are four trends that set us apart:

1. Canadians share their digital love equally between desktop and mobile

Unsurprisingly, smartphones are now the dominant platform in terms of total digital minutes in all of the 13 digital markets analyzed by comScore. However, the Canadian market is where this trend is least noticeable.

A sector where this trend is very apparent is news and information. While this category of content, on a global scale, is often consumed more on smartphones than desktops, Canadians prefer the latter to get their daily news.

Nevertheless, we have to note that this difference remains marginal as the category experiences 95% reach on both mobile and desktop.

2. Many Canadians still use a tablet

It’s no secret: the tablet market is slowly declining, year after year. According to the International Data Corporation (IDC), tablet shipments have continually declined over the last 13 quarters. This is in part due to the release of smartphones with extra-large screens (referred to as phablets).

Despite this, Canada still has some very loyal tablet users. The country actually boasts the highest share of tablet minutes (15% of total digital time) among all of the markets included in comScore’s report.

This distinctive Canadian trend partly explains why smartphone shares decreased in Canada from 2016 to 2017. However, this does not mean smartphone minutes actually decreased, but rather that overall digital time increased—and faster—on other platforms.

When it comes to the most used type of apps, another interesting trend can be observed among Canadian users.

In all of the 13 markets examined, the overall time spent on apps is concentrated in four categories: entertainment, social media, instant messaging and games. While the social media category dominates in most markets, Canadians seem to prefer the entertainment category above all. 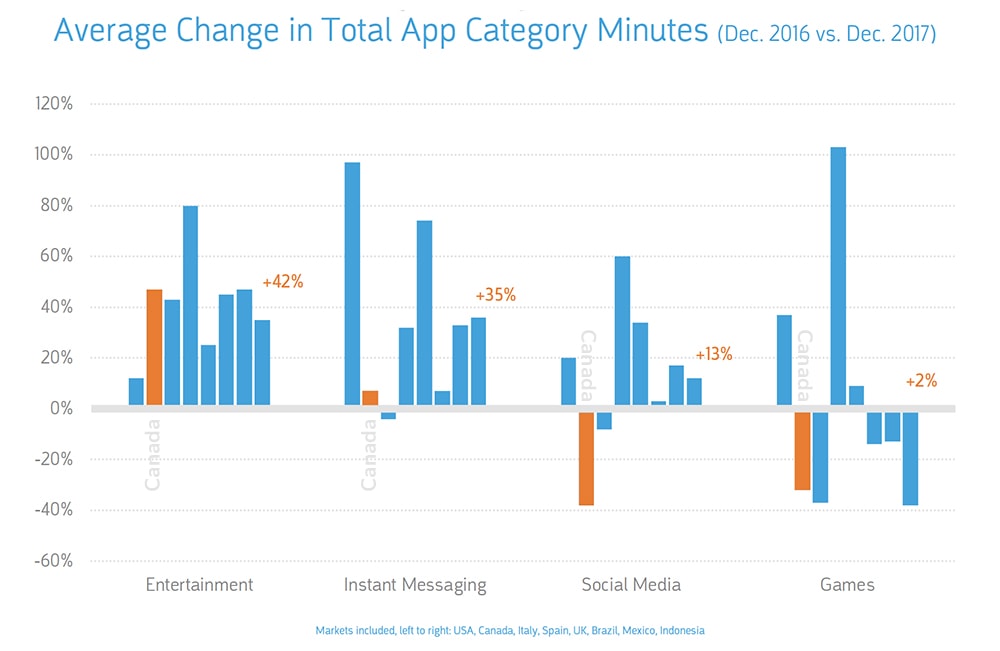 As we can see, the rise of entertainment apps comes with a slowdown of social media and gaming apps.

4. Competition for attention is fiercer than ever among apps and websites in Canada

A little over half of the markets examined in the report demonstrated a positive year-over-year change in the number of global apps and websites reaching at least one in ten digital users.

Unfortunately, this growth was not observed in Canada in 2017. The country shows one of the sharpest declines along with Brazil, meaning that considerably fewer properties managed to achieve a 10% reach in 2017 compared to 2016. Competition for users’ attention is clearly very fierce at the top.

Nevertheless, comScore is quick to point out that this data doesn’t necessarily indicate top heaviness in those two markets.

To prove its point, it compared the performance of the top 100 properties, excluding the Facebook-Google duopoly, in Canada and Brazil. It found that, in both markets, the top sites saw increases in consumption times ahead of the overall market. 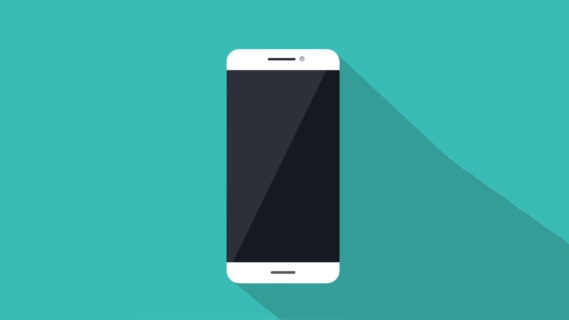 Internet: Four Global Trends to Watch Out For

Read more
Feb 16, 2018
We use cookies on our website to give you the most relevant experience by remembering your preferences and repeat visits. By clicking “Accept”, you consent to the use of ALL the cookies.
Cookie settingsACCEPT
Manage consent