The Need-to-Know Game Industry Trends of 2014

As 2014 draws to a close it’s natural to pause and look back on the year that was in the game industry. Between mobile, console, new business models and increasingly closer ties to trends and technology in the greater consumer technology world, it’s been a fascinating year. Here are three need-to-know trends that shaped 2014.

As explained in a September blog post, watching games has become not only a profitable form of entertainment, but a viable marketing and community-building channel for developers and retailers. Up and down the value chain, videos of games are clearly beneficial.

Amazon purchased leading game video platform Twitch for nearly $1 billion in August, providing them with more content and ways to promote the games they carry.

A Twitch user broadcasts himself as he plays Hearthstone: Heroes of Warcraft. The player can chat with his audience via the window on the right side of the screen.

Creators are streaming live footage of development, giving fans an inside look at the process. Indie hitmakers Vlambeer streamed the development of Nuclear Throne, driving pre-orders and creating a rabid fanbase before the game was even released.

The burgeoning e-sports scene is supported by this trend as well, providing a natural home for the broadcast of professional tournaments with purses in the millions of dollars.

Lastly, fans and prospective purchasers can more easily view games through the lens of an average player like themselves, beyond what marketing departments have chosen to show in press kits and trailer videos.

Virtual Reality on the Cusp of Reality

For decades now, virtual reality has been an elusive goal chased by countless companies via 3D graphics, goggles, glasses, holograms and other avenues. However, by all accounts 2015 will be the year that VR finally fulfills its promise.

The Oculus Rift is the catalyst for this turning point, developed by 22-year old Palmer Luckey (on the back of a $2.4 million Kickstarter campaign) and purchased by Facebook earlier this year for $2 billion. Feedback from developers and those that have tried the unit is near universal in praise.

Expected to release in 2015, the technology and palpable hype behind the Oculus has started a VR “space race” that has led Valve and Sony to announce their own hardware. Carl Zeiss has even just released a $99 headset for smartphones, beating the big players to market with a low-cost entry that will appeal to early adopters that simply cannot wait. 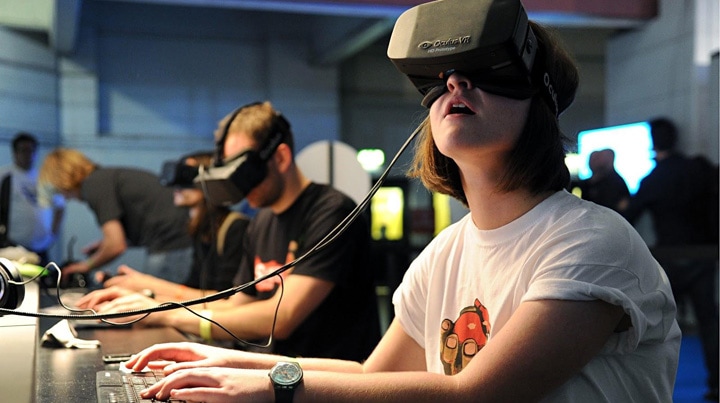 However, ultimately a technology is only as good as the software built for it. Augmented reality and microconsoles such as the Ouya (sub-$99 consoles meant to disrupt high-priced systems like the PlayStation 4) were once touted as the “next big thing” but this sticking point (in addition to others) has caused them to fail so far.

For a hardware platform moving as quickly as mobile, the fact that we have largely been hooked on the same games for the past few years may come as a surprise—only 8 of the 25 top grossing games on iPhone in the U.S. were released in 2014 (top 10 list courtesy of AppAnnie).

And looking at those that were launched this year, patterns quickly emerge: all the top games from 2014 are from major players (Supercell, King, EA) and/or leverage established brands such as Family Guy, Madden, and in a success that surprised many people in the industry, Kim Kardashian.

In addition, most of these games are based on genres familiar to anyone with even a casual interest in mobile games: city builders (Family Guy), match-3 (Candy Crush Soda Saga) and social casino (Big Fish Casino).

Are these games simply that good? Or are these the signs of a mature market? Is the rampant CPA (Cost Per user Acquisition) on mobile keeping out competition? To varying degrees it can be argued there is a mixture of all three.

What does all this mean for mobile games in 2015? Potentially less innovation on the product side, but possibly more innovation in advertising to help keep smaller developers profitable.

These three trends are symptomatic of greater shifts in the game industry: the appearance of both new business models and entirely new businesses, adoption of new technologies and an increasing use of big brands in mobile games. They all point towards the undeniable fact that games are growing, exploding as a truly mainstream form of entertainment. Each of them will undoubtedly be a major part of the conversation in 2015 and likely beyond.

Kevin Oke is co-founder of Victoria BC-based LlamaZOO Interactive, an award-winning educational technology start-up. Kevin has worked as an employee and consultant in digital interactive entertainment for 10 years. He has worked with Fox, Electronic Arts, Sky Sports and Nickelodeon on 40+ projects.
Read Bio
Related articles

Social media for kids: a growing need for virtual...

Read more
Nov 17, 2020 / Leora Kornfeld
We use cookies on our website to give you the most relevant experience by remembering your preferences and repeat visits. By clicking “Accept”, you consent to the use of ALL the cookies.
Cookie settingsACCEPT
Manage consent