The State of Mobile 2019 by App Annie: The Digital World at the Tip of Your Fingers

In 2018, there were more than 4 billion mobile devices – both smartphones and tablets – in circulation worldwide. In mature markets, many people own more than one device, while in emerging countries such as India and the Philippines, where the internet is mostly mobile, a large segment of the population can only access the web through a mobile device.

These are some of the findings revealed by App Annie, a platform that provides data and analyses on the mobile app market, in its 2019 annual report on the state of the mobile market.

In an environment where, according to estimates by the International Telecommunication Union (ITU), in 2018, 96% of the world population lived close to a mobile network, and where the number of mobile phone subscriptions had now surpassed the number of people on the planet, no one can be surprised by this bit of information: the app economy, namely the sales generated by the various app stores (Apple’s App Store, Google Play Store and those in China) reached $101 billion US in 2018 – a 75% increase since 2016.

The report goes on to say that mobile devices have become an integral part of our daily life, and they have transformed the way major industries worldwide do business. Such a transformation, though, is attributable not so much to the devices themselves as to the way we use them. Such a use is determined by the many applications found in app stores. Indeed, in the third quarter of 2018, there were 2,1 million apps in Google Play Store and 2 million in Apple’s App Store.

App Annie assesses the performance of several app categories, ranging from retail to bank and financial services. Through a succession of micro-moments – that is, regular sessions throughout the day when people check their emails, read articles online or verify their banking information –, but mostly in light of the time spent on social media, mobile games or videos, people in many developed countries such as Canada and the United States spend nearly three hours a day staring at a mobile screen, while in some emerging markets such as Indonesia, that cumulative daily period can surpass 4 hours. 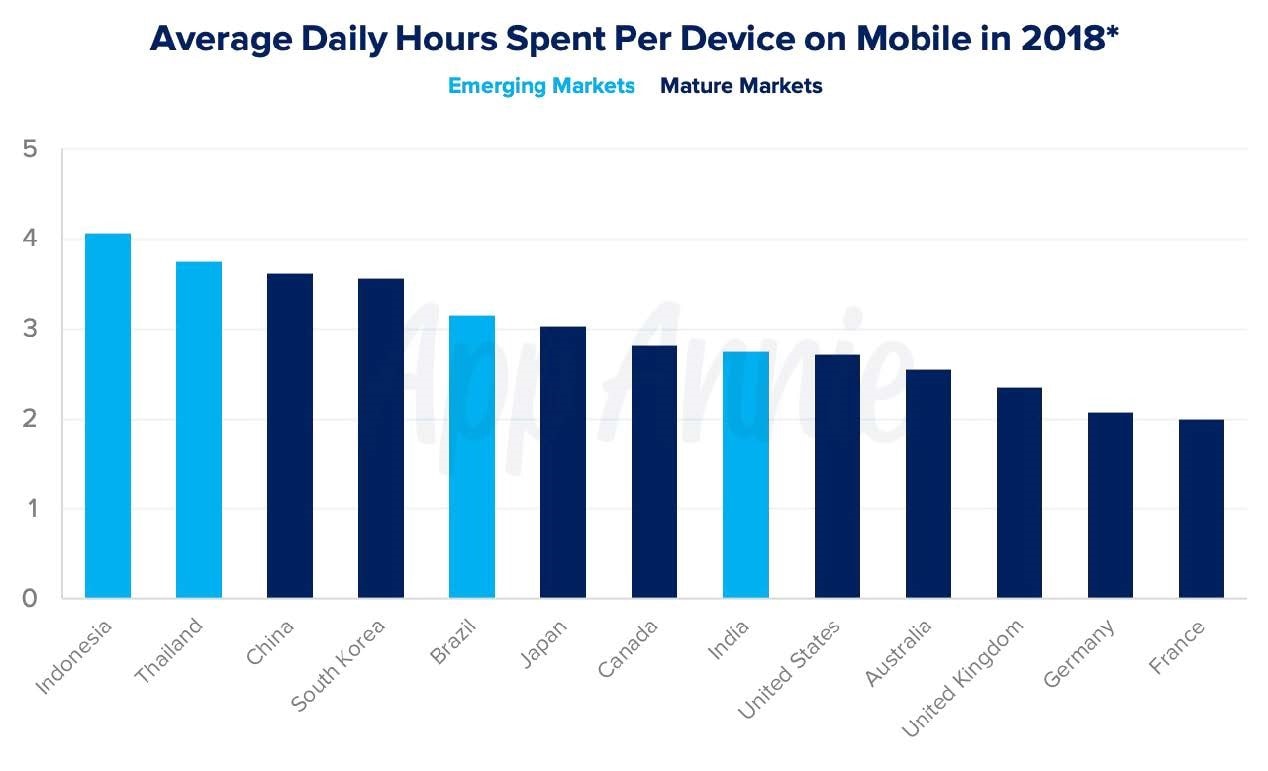 The report ranks the apps according to the time and money consumers spend on them. The data pertaining to consumer expenses comes from Apple’s App Store as well as Google Play Store. The amounts exclude any revenue generated by ads included in the apps. They do, however, represent the total sum before Apple and Google take their cut – about 30%.

Video streaming apps featured in the report are those that include at least a few extended videos, TV series, feature films, news programs and sports events, including electronic sports.

In 2018, consumers spent some $2.2 billion US on such apps. Netflix is the most lucrative of the bunch, though some local services are featured on the list, such as Globo in Brazil, AbemaTV in Japan and Viu in Thailand and Indonesia.

Worldwide, the time spent on the Top 5 mobile streaming apps is up 140% compared to 2016. In India, the increase reaches 195%. This might be due to the fact that, in this country where the web is mostly accessed through mobile devices, Netflix became available in 2016. Indeed, the company relies on India – where the population reaches 1.4 billion – as a key component of its international development efforts. Case in point: Netflix is developing original series in Hindi and English specifically for this market.

Seven of the ten apps for which consumers spent the most in 2018 are video streaming apps. Three of them are Chinese, namely Tencent Video, iQIYI and Youku, while a fourth is based in Singapore.

The top 5 apps on the list allow for the possibility to subscribe to video content directly on a mobile device. In 2018, consumers spent nearly $20 billion US for such apps. That amount totalled less than $4 billion in 2013. 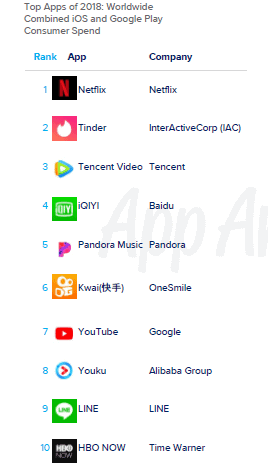 The report reveals that Zuora, a company that provides technology used by the subscription economy, went public in 2018 with a market value of $1.4 billion. App Annie predicts that, between 2017 and 2022, the total amount spent on apps other than games will increase by $75 billion, an amount mainly attributable to subscriptions.

App Annie also expects Netflix to drop several spots on the list next year, the company having announced at the end of 2018 that it would no longer allow subscription to its service through the App Store. Netflix explained that its intention is to keep all revenues generated through subscriptions, without having to hand back 30% to Apple.

Video games: the rise of mobility

Since 2017, the amount spent by consumers on mobile games has surpassed all other formats combined, namely PC/Mac as well as regular and portable game consoles. According to App Annie, mobile games should make up 60% of the global video game market in 2019. 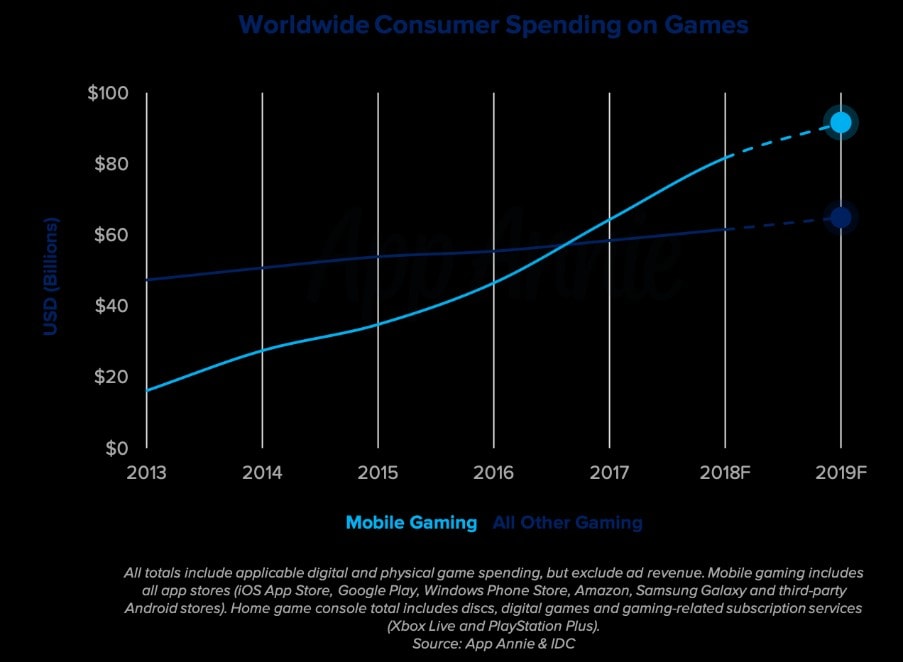 The popularity of multi-player games such as Fortnite and PUBG, as well as an improvement in the technical capacities of smartphones, have contributed significantly to the increased popularity of mobile games, according to App Annie’s analysts.

Despite a slowdown brought on by the Chinese government’s decision to temporarily put a hold on new gaming licences in 2018, nearly 50% of all game downloads throughout the world in 2018 are attributable to Chinese players. Emerging markets also play an important part in this upward trend, now representing 3 of the 5 biggest markets for app downloads.

The Chinese market also happens to be where players spend the most: nearly $30 billion US in 2018, a 105% increase compared to 2016. China being the largest video game market in the world with an estimated 600 million players, the top 10 games in terms of consumer spending are all made in that country.

The year 2018 marked the 10th anniversary of the App Store and Google Play. It was also a year that confirmed the mobile economy was here to stay. We have yet to witness the magnitude of its impact on society. For the younger generation, the 16- to 24-year-olds who will define the success of future apps, mobile technology has now become second nature. It is an integral part of their life. They use mobile platforms to communicate, socialize, shop, etc. 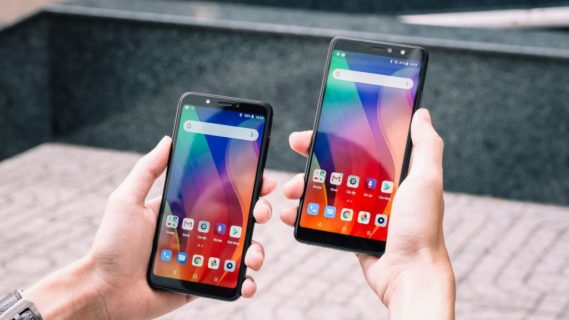 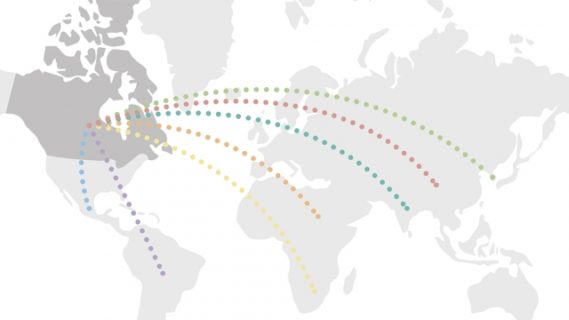 When The World Is Your Market: Globalized Media from a... 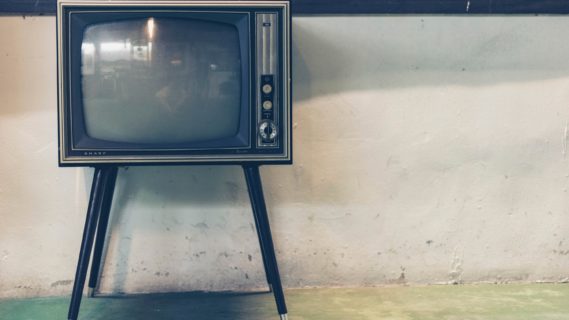 Read more
Apr 5, 2019 / CMF-FMC
We use cookies on our website to give you the most relevant experience by remembering your preferences and repeat visits. By clicking “Accept”, you consent to the use of ALL the cookies.
Cookie settingsACCEPT
Manage consent