The State of the Digital World: Major Internet Trends in 2018

The Internet Trends Report is the industry bible, eagerly awaited each year by hordes of investors, researchers, and technology journalists who depend on it for everything you need to know for successfully investing in new technologies, from mobile to online shopping, including the competition between today’s online giants. Overview of the main takeaways of this presentation.

The report’s reputation presenting data mostly from American sources is due in large part to its author, the legendary Mary Meeker, partner in the venture capital firm of Kleiner Perkins Caufield & Byers, whose credibility continues to grow with each annual edition.

While some observers point out that Mary Meeker has a direct financial interest in describing the state of the technology industry with rose-coloured glasses, her intentions are fundamentally good while government regulation is generally questionable, so they acknowledge that the report presents a collection of interesting and generally reliable facts with a sound overview of the state of the digital world.

A slowdown in smartphone sales and new users

Growth in the number of internet users is also slowing (up 7% last year compared to 12% for the year before). But as Mary Meeker points out, with 3.6 billion internet users worldwide, the number of people online also surpassed more than half the world’s population in 2018 (it was just 24% 2009). “The reality of all that for the business people in the room, when you get to a market, when you get to 50 percent penetration, new growth becomes a lot harder to find.”

In the US however, growth in hours per internet user remains strong, mainly due to a sharp increase in mobile usage. Indeed, the time spent on connected devices continues to increase, with adults online an average of 5.9 hours a day, and the majority of that time on mobile devices. Mobile is also the only category where usage is up compared to the previous year. 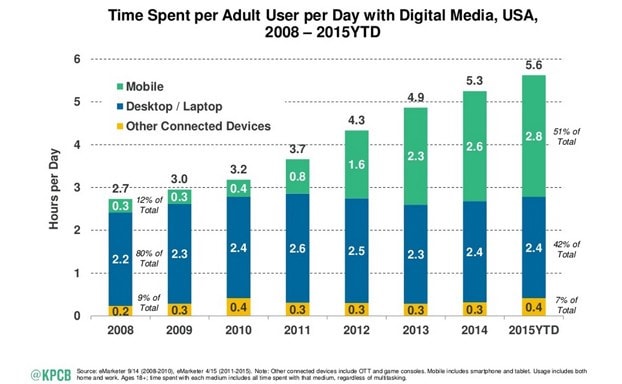 Devices continue to deliver more performance at less cost Meeker says, while the expansion of Wi-Fi networks worldwide (just over 300 million) has helped to dramatically increase the number of online users. The average price of smartphones (including used appliance resales) has decreased from about US$400 to US$300 over the past 10 years.

The competitive advantage in the market depends more and more on innovation and product utility, ease of use, and personalization, like iPhone’s facial recognition or Android’s image recognition (searching for photos of objects that can lead to direct purchase).

The trend toward monetization is up

The evolution of how consumers discover products, social media that facilitate discovery and shopping, subscription services, mobile advertising, and other US trends covered by Kleiner Perkins in recent years has become increasingly important.

A significant portion of social media users have found products through social media and bought those products after discovering them, a trend that is growing fast: 6% of referrals to online shopping sites came from social media in 2017, up from just 2% in 2015. Asked about which social media helped them find the products they were looking for, US consumers mentioned Facebook first, followed closely by Pinterest, and then Instagram, a discovery process that translates into purchases 55% of the time.

In addition, consumers overwhelmingly prefer subscription services. Among the most representative services, subscriber increases for 2017 ranged from 25% for Netflix and Dropbox, to more than 40% for Spotify and The New York Times, and 172% for Peloton, an app that offers stationary bike and treadmill workout sessions. 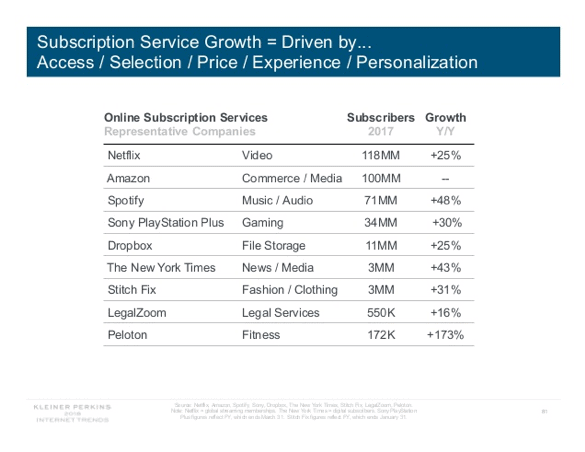 Despite all the innovations in the mobile device sector, marketers still under-allocate advertising dollars to mobile platforms: users spend 29% of their media time on their devices, while advertisers allocate just 26% their budgets, which Meeker says represents a US$7 billion shortfall for advertising platforms. It also means that mobile ads continue to be sold at a discount, while ad spend on print, television, and desktop media remains over-indexed relative to time spent.

Personal data, grouped, harvested, and shared is the engine of innovation and monetization

Smartphones, time spent on social media, number of messages exchanged on messaging services: all these variables have grown rapidly in recent years and are now just starting to slow down in terms of devices. 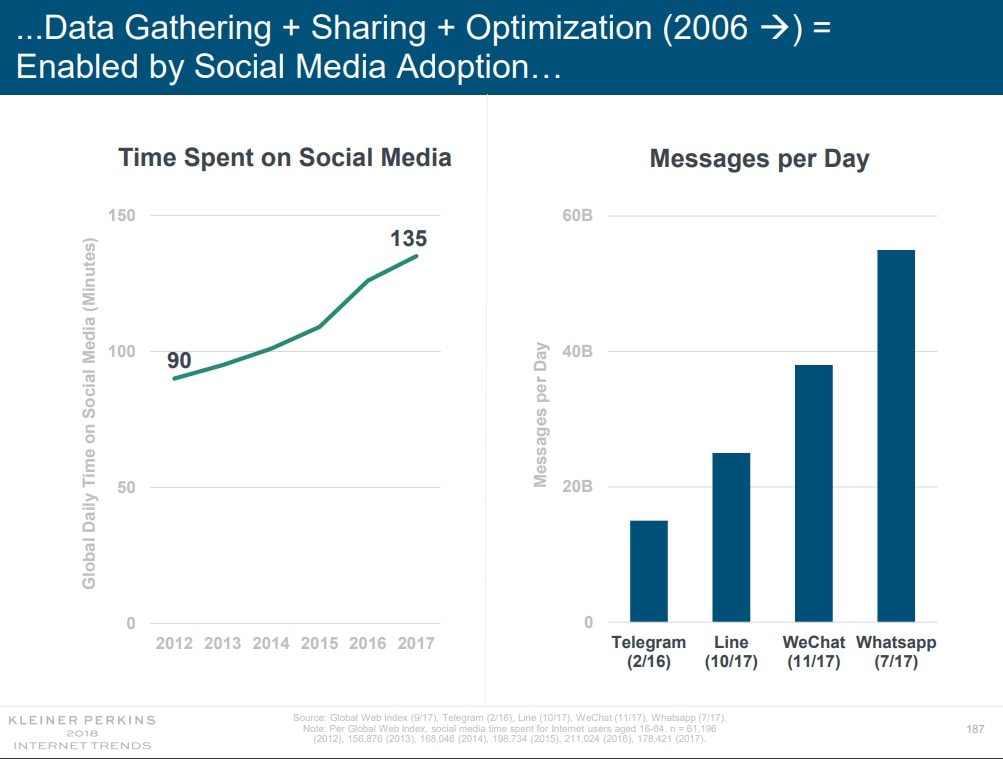 If we add the Internet of Things (IoT) and its pervasive sensors to this phenomenon, the annual volume of data generated by the internet will continue exploding at a pace that should reach, according to the source quoted in the Kleiner Perkins report, 163 zettabytes (1 zettabyte = 1 trillion gigabytes) by 2024.

According to Meeker, more data leads to better analytics, which generates better products, which are bought by more customers, which leads to more data...

Meeker calls this a data flywheel (a system that uses the size and mass of a wheel to produce energy) for data. This drive supports new artificial intelligence services that have become affordable for a wide range of developers, like cloud computing from Amazon Web Services (AWS) and Google Cloud Platform, whose offerings now include image recognition, language processing, machine learning, scalable computing power, and custom machine learning models.

Meeker warns that we must be able to deal with the unintended consequences that sometimes result from the massive adoption of certain technologies or applications.

Facebook and Google, she says, had no choice but to make the tools for protecting consumer privacy much more accessible. In 2017, YouTube had to remove 8 million videos with controversial content and Facebook eliminated more than 500 million fake accounts. (Recently, Twitter suspended more than 70 million accounts suspected of being fake or of breaking company rules.) 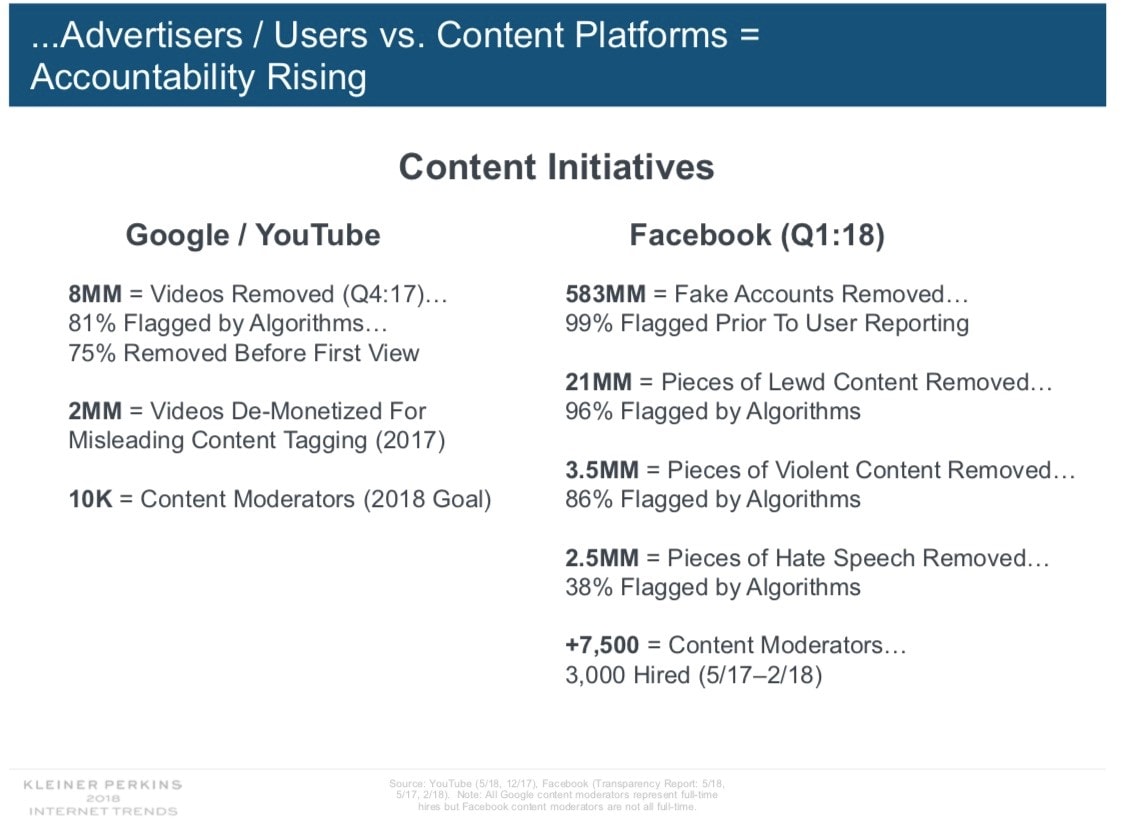 Nations are also reacting to these new realities of the connected life, but not all of them intervene with the same force. This is what Mary Meeker calls the paradox of privacy: “Internet companies are making low-price services better in part from user data. Internet users are increasing their time on internet services based on perceived value. Regulators want to ensure data is not used improperly, and not all regulators think about this in the same way.”

Europe has been where interventions have been the most direct:

As Meeker explained during her presentation: “When you have rising monetization, rising growth and rising data collection, it drives a lot of regulatory scrutiny whether it’s related to data privacy, competition or safety in content. For the internet companies, it’s key to understand all this stuff and it’s very complex. We’re in the middle of it all right now and will be for a long time to come.”

While Europe steps in to protect the data of its citizens, the government in China is encouraging the collection and sharing of data with the stated goal of promoting the development of artificial intelligence.

Chinese consumers are responding very positively to this request: there are 753 million mobile internet users, and their consumption of online video is booming (total time on media and entertainment apps has increased from 13% to 22%), no doubt the reason why their mobile online data consumption grew by an astonishing 162% in 2017. They’re also the most willing consumers in the world when it comes to sharing their personal data in exchange for benefits. 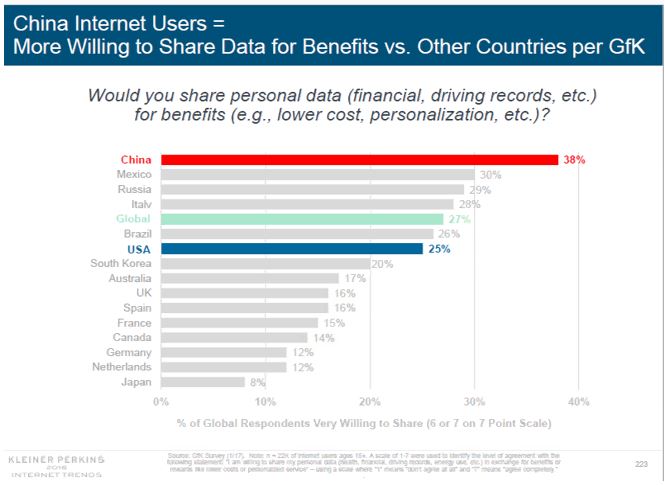 The most valuable company in China is Alibaba. It owns the country’s leading online shopping ecosystem and is comparable to Amazon in many respects. Just like Amazon, Alibaba is not just an online shopping platform, but a vertically integrated conglomerate that also operates in retail stores, in online payments, online entertainment, and cloud computing.

Alibaba is expanding its operations beyond China through acquisitions and equity investments (approximately 8.4% of its revenues came from outside China in 2017, compared to 7.9% the year before). The group has developed a retail concept called New Retail, where the shopping experience, whether in the real or virtual world, is fully digitized, and which may be a good indication of what to expect in our even more connected lives in the years ahead. 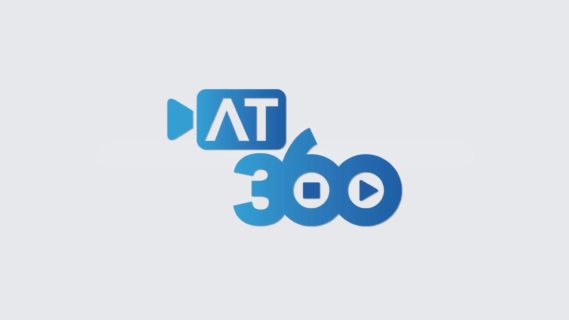 MediAT Rose to the Challenge of Creating a Production... 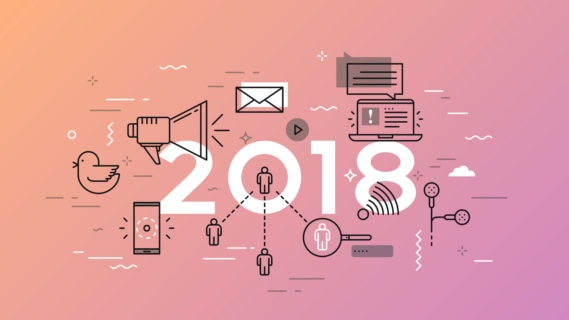 Digital Media and Television: 8 Trends of the Summer 2018

Read more
Sep 5, 2018 / Méta-Media
We use cookies on our website to give you the most relevant experience by remembering your preferences and repeat visits. By clicking “Accept”, you consent to the use of ALL the cookies.
Cookie settingsACCEPT
Manage consent