Read the report on our recent consultation
Now & Next Menu
Nov 16, 2018 / Leora Kornfeld

The recently opened Artscape Daniels Launchpad brings together studio facilities, mentorship and educational programs as well as pathways to funding for digital, technical and artisanal creatives.

There’s a lot more going on in Toronto’s east waterfront area than just condos, restaurants and retail outlets, although there are plenty of all of those popping up in the formerly industrial area that was perhaps best known as the site of the now defunct music venue complex The Guvernment. The area is rapidly turning into a full-fledged innovation district spanning hundreds of thousands of square feet and hundreds of millions of dollars being invested into such large-scale projects as Sidewalk, the not uncontroversial digital mini-city from Google parent-company Alphabet, and a recently announced partnership between the University of Toronto and MaRS aimed at serving the city’s burgeoning tech ecosystem.

Among all the cranes and steel and glass dotting the waterfront corridor is the so-new-it-still-has-the-new-building-smell Artscape Daniels Launchpad. The Launchpad is a 30,000-square foot multidisciplinary arts and technology centre that houses digital production studios for everything from music and film to photography and graphics, spaces for artisans such as jewellery, textile and fashion designers, a learning centre for entrepreneurship programs and special events, and—it goes without saying—a much needed co-working space where creatives with laptops can already be found working away on album covers, merchandizing plans and even robots. 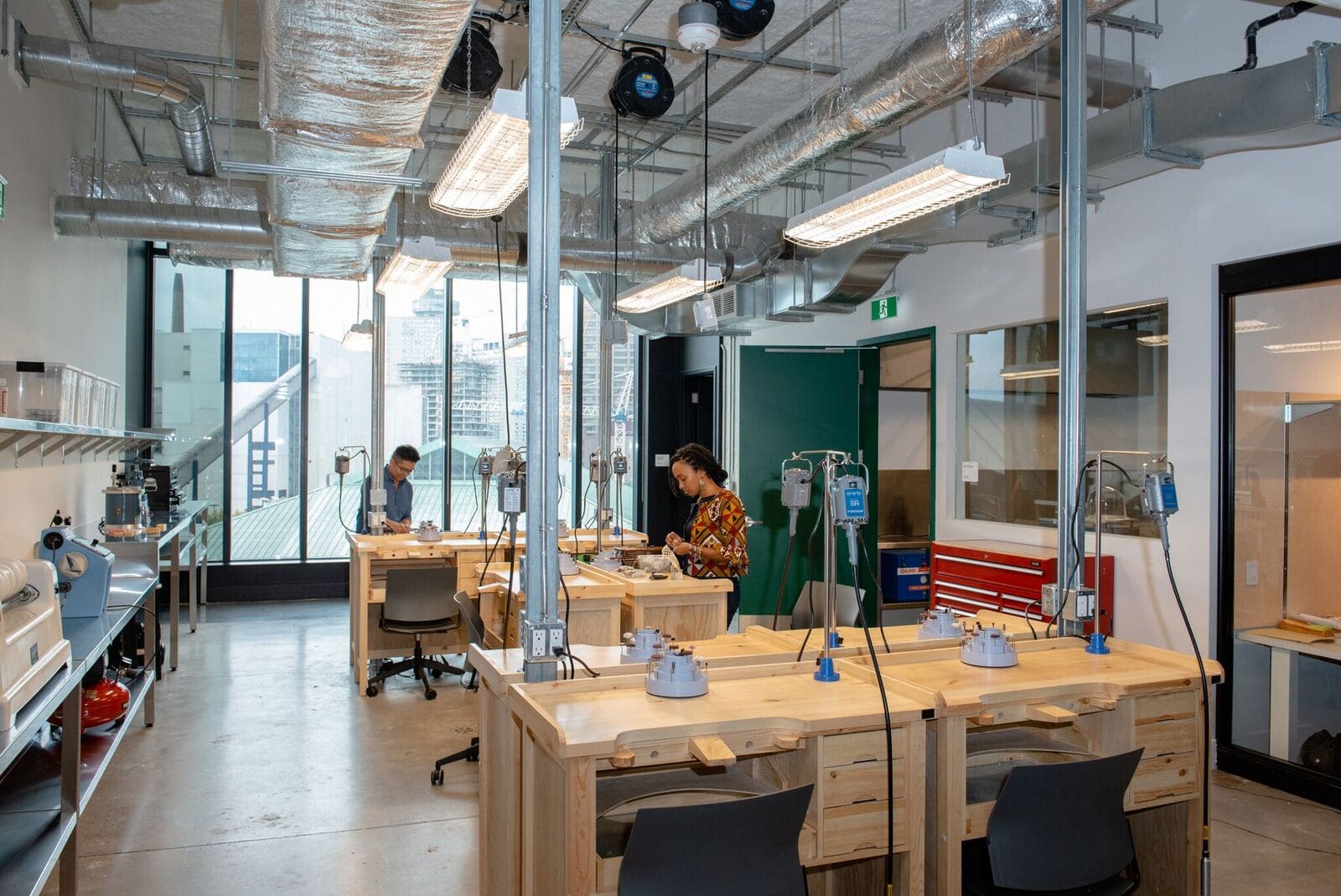 Debunking the myth of DIY

“When you’re working away in your bedroom, you tend to think you have the things you need but in reality you don’t have the right toolbox,” explains Launchpad’s managing director Karim Rahemtulla. And this is indeed the predicament in which so many artists end up. They may have the tools to make the digital or physical thing that is their passion, but in today’s supply-heavy creative economy, the mere act of making is not enough. “How do you find graphic designers, merchandizing people, connections to industry?”, adds Rahemtulla. “It’s about figuring out what makes up the creative ecosystem and then creating collaboration points between talent, skills and industry.”

And this is where the centre’s thinking differs. Launchpad is a manifestation of the question of what would happen if a physical space brought together under one roof the latest and greatest in terms of studio facilities, access to coaches and mentors, entrepreneurship and business skill development programs as well as pathways to funding. The public-private partnership is the result of over a dozen years of research into the changing face of the creative economy around the world and is maybe the only centre of its kind in the world with such an all-encompassing model.

Rahemtulla and Launchpad Creative Studios’ manager Robert McMahon describe what they call an ‘end-to-end ecosystem,’ i.e., one that supports the journey from the digital version of a sketch on a napkin to the design, prototyping and a go-to-market plan. As an example of this model, they cite Launchpad’s state-of-the-art jewellery design studio which enables artists to go from digital design to 3D printing for a tiny fraction of the cost of the conventional method of creating moulds and handcrafting or machining metals and gems.

McMahon also points to some of Launchpad’s not yet designated studio spaces. “At first, we were going to have the digital print studio as part of our opening but then we realized a better approach would be to see how people are actually using the spaces we do have. We want the creatives to dictate to us, not the other way around,” states McMahon. “We want them to tell us what SDKs [software development kits] they want to use, how they’re combining and recombining different elements, what they need to be able to work in VR and AR.” Rahemtulla adds this: “Then, we layer on specialty skill sets like SEO, how do you grow your Instagram following, how do you get yourself in front of companies, basically how do you get yourself ready for a global market.”

And, not unlike the parent who wants to be both supportive of their offspring’s creative endeavours while making sure they don’t occupy the basement on a permanent basis, Rahemtulla points out that Launchpad’s ultimate goal is to teach the skills that creatives need to have an actual career, to make money and to be independent. As he succinctly puts it: “How do we get you out of here is a question that won’t be shied away from.”

On the importance of strategic dependencies

Rahemtulla believes that it’s all part of moving from thinking about system change—which is largely driven by policy—to network change—which is about how people interact, form relationships and actually work together. “One of the problems with Canada’s creative economy is that we have too many independencies,” he says, in reference to the hundreds of thousands who work away on their projects largely in isolation, often supported only by a combination of precarious work and grants. Rahemtulla goes on to describe the cross-disciplinary groups he’s been witnessing at work at Launchpad. “They might have a core of 1 or 2 people and then they add people for specific projects. People come and go and bring their skills and talents as needed and then go on to do other things. We want to facilitate these kinds of strategic dependencies between creators who generally work independently. It’s a new way to scale and an entirely new model for the creative economy.”

Within Launchpad, a prime example of this approach is Hxouse (pronounced ‘house’), an incubator and accelerator program founded by La Mar Taylor, creative director for recording artist The Weeknd, and integrated into for-credit programs at George Brown College and OCAD. In addition to the obvious connections with the entertainment industry that come with the participation of the Hxouse crew, the organization also includes a creative agency that has brand deals with Puma, Adidas and Nike among others. “We came to the conclusion that the system was broken and we didn’t want to complain about it,” saysTaylor. “We just wanted to reverse everything we were taught and change the game.” Hxouse co-founder Ahmed Ismail adds: “We have the kind of relationships where we can turn to our industry partners and ask them what is the new trend they are hiring for? If they say they need an all-in-one video producer, editor and content creator, we can then incorporate that in real time into our curriculum.” The result is a combination of creative expression, educational credentials, real-world experience and a path to revenue streams.

Taylor and Ismail’s thinking blends well with Rahemtulla’s larger vision for Launchpad. When asked how the centre’s success will be evaluated, he references his many years working in the NGO sector with the Aga Khan Trust for Culture. “We use these metrics called SDGs [sustainable development goals] which are defined around all aspects of quality of life. We look at how members’ lives are impacted—physically, socially, creatively and financially. This is how we create better communities and better urban fabrics.”

To learn more about membership options, visit the Artscape Daniels Launchpad website. You can find more information on funding opportunities via the Launchpad partnership through the CMF’s Accelerator Partnership Program (A2P).

Read more
Jun 26, 2018
We use cookies on our website to give you the most relevant experience by remembering your preferences and repeat visits. By clicking “Accept”, you consent to the use of ALL the cookies.
Cookie settingsACCEPT
Manage consent