Read the report on our recent consultation
Now & Next Menu
Oct 14, 2021 / Samuel Larochelle

Every Day is Day One for Manon Barbeau

Manon Barbeau must have been dipped in a magic creative potion at birth. The daughter of artists Marcel Barbeau and Suzanne Meloche, inspiration has been coursing through her veins ever since. She’s not only the brains behind the Wapikoni project, providing mobile audiovisual production tools for Indigenous creators to turn out some 1200 films about their way of life, she’s also written and directed hundreds of projects of her own since starting at Télé-Québec in 1972. And five decades later, every day is still Day One for her.

What does your 50-year career mean to you?

I never gave it a thought before. Kind of makes me a bit lightheaded. Imagine that...a whole half century. I guess I’d better give some thought to how that happened. There have been times when I felt I did do a lot but when you put it in perspective over half a century, I realize that I haven’t done that much. I’m going to prepare myself better for the next half century, synthesizing everything I’ve done in the first one before deciding if I want to go forward in the same direction.

But your creative output has been amazing!

Yes, but Wapikoni Mobile and Musique Nomade more or less absorbed all of the last 20 years of my life. Strange when you think about it but giving the stage to others ended up taking more time, more thinking, and more energy than the rest of my working career combined. That’s not to say that I’m unhappy with my career as a director. Documentaries like Les enfants du Refus global (children of the Refus global declaration) were definite turning points in my life. They helped me to understand the impact art can have in the world and the transformative power it has on those creating it. That’s why I decided to help others in their art, so it would have the same life-changing effect on them.

How did that come about?

I started working with street kids and let me tell you that was an amazing and enriching experience on a human, philosophical, and ideological level. Then, in L’Amour en pen (love behind bars), I gave the floor to prisoners, some of them murderers, to show the human side of those behind the crimes and to give them the opportunity to be seen in a new light. Not long after, I went to meet a group of young Indigenous while prepping La fin du mépris (the end of contempt), a feature film they would end up acting in. The one who was to play the lead character, Wapikoni, was killed in a vehicle accident before shooting began. She was just 20 years old...and this tragic event completely changed my career path as a filmmaker.

Rather than making films and collaborating on scripts with them, my project evolved into five mobile film studios travelling to 35 communities in Quebec, Canada, and South America as well as to marginalized communities like the Bedouin and Roma in partnership with UNESCO. This was an incredibly energy-intensive project. So much so that I tend to forget the 30 years before, which does make it 50 years in the business for me.

Early on did you have any idea at what age filmmakers retired?

I’ve never even given it a thought. Not in my vocabulary. Retirement from what? From life?

Did seeing your parents work well into old age affect your vision of filmmaking?

My father was certainly a great role model. At age 92, and just a couple of weeks before he passed away, he was out buying 16 new brushes to continue painting. I didn’t know my mother very well. I talked to her maybe a couple times, once on the phone when she was 90. She still spoke with the clear flowing voice of a bright, rebellious young woman. Maybe go-go energy like this is in our genes. I remember one time being invited to China to meet with someone doing much the same thing I was doing with cultural minorities. We had meetings until the cows came home. And when I finally got home myself, I literally collapsed for the first time ever. A sure sign that I gave out more than I had to give. It made me think that I should gauge my energy level better...but to no avail. I never gauged it before and never have since.

So, you haven’t changed your pace at all?

The pandemic forced me to ease up in a way that was extremely beneficial I’d have to say. I realized that I’d never been alone except when I was kid. At the height of the pandemic, I found myself at the end of a deserted dirt road in the middle of the Eastern Townships. I felt a bit guilty enjoying a deep calm I’d never felt before when so many others were experiencing so much misery. It made me refocus on my inner self and my capacity for happiness. I don’t seem to have quite the same frenetic energy now. For decades, I could give an endless stream of public lectures and presentations and it never fazed me. Now I do feel a difference. Giving to others now requires an energy output that I didn’t quite feel before, I guess.

How do you explain this recent change?

I was driven by a force somehow connected to my childhood. I was deprived of making connections with others at a very young age and it affected my psychological, emotional, and physical well-being for a long time afterwards...my repressed emotions seem to have surfaced as this driving force. Reaching out to others fulfilled my need to connect so effectively, individually and collectively, that I was infused with a tremendous energy of desperation.

Do you feel there’s still a demand for your vision as a filmmaker?

There’s a lot of talk about ageism in the industry, but I don’t feel it. I recently made a funding request to Quebec’s Société de Développement des Entreprises Culturelles (SODEC). The funding was approved so there must still be some interest in my work. I do have an ace up my sleeve, of course, coming from a family of artists. It tends to generate a little extra interest in what I’m up to.

Tell me more about the difference it’s made in your life coming from a family of artists.

I always admired my father’s perseverance. When he was in a deep depression, he would create his most well-balanced paintings. When he eventually found his equilibrium, he managed to maintain it for the rest of his life. He would have been institutionalized otherwise because he was terribly vulnerable and paranoid. Even given the fact that my mother left us when I was just a child, I still have great admiration for the positive, lively attitude she always had.

How was this passed on to your children?

I read my daughter’s (Anaïs Barbeau-Lavalette) novels before they’re published. I had read and commented on La femme qui fuit (the runaway woman) because it concerns me directly. I haven’t seen the finished product yet because when I do, I better be ready for an earthquake. But there’s no doubt that she’s my daughter. She’s always been able to share her insecurities, her doubts, and her anxieties with me. I know how to handle that. I know what to expect with Chien blanc (white dog), her upcoming film on racism. That’s something you can’t talk about anymore if you’re white. It’s something she’s done with the best intentions in the world, and with the collaboration of several Black persons on set and as consultants. But you can be sure there’ll be a firestorm of protest anyway. We’re in constant contact. That’s what’s most important to me. It’s like I’m back in the saddle.

Has your ability to take risks over the years been based on your level of self-confidence or perhaps even a measure of financial security?

What financial security? I’ve almost always been self-employed. I was just getting a token salary in my years at Wapikoni for all I was doing. And since I’ve left the management of the organization to someone else, I’m even less financially secure. I don’t even have a pension plan. So, in terms of self-confidence, my days are filled with self-doubt, with every decision and with every contact with my team. That’s not to say I don’t have any self-confidence. My concrete achievements and public recognition give me confidence, of course, but I still have to deal with doubt.

You got me there. I think I’ve always been a risk-taker at heart. After all, I did lock myself in the same room with convicts, some of them murderers, to make a film. And when I started Wapikoni, everyone told me it was a crazy project. I’m not sure if it was an audacious or outrageous move. I don’t think I’d have the energy to start something like that again, running an organization with dozens of employees and millions in funding. Fortunately, I still have energy and enthusiasm to spare for smaller, innovative projects and to explore new modes of expression. I’m quite fascinated with what the Centre PHI and Félix & Paul are doing.

What film project are you working on now?

A project that I’m already late on. My son has a rather special background, and he’s a pretty profound man in his own right. He’s made a series of extraordinary abstract photographs. I want to establish a connection with him by taking a journey inside his photos. I’d like to animate the photos with 3D technology. This project is very dear to me, but I’m so busy with everything else I haven’t been able to prioritize it. As for the rest, I’ll still want to do more than I should and probably will because I honestly feel more liberated and more determined than ever. 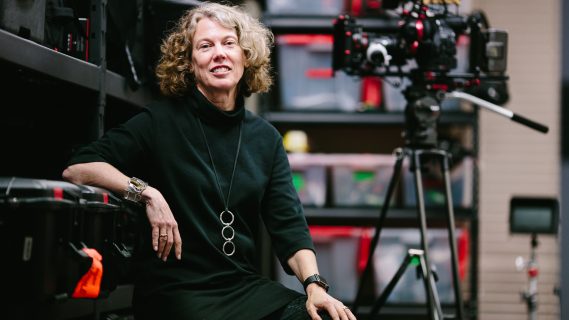 For Sylvie Peltier, Every Day is a Red Letter Day… Even in...

Encore+ YouTube channel marks one year of bringing back...

United and stronger than ever, MADE | NOUS movement...

Read more
Feb 6, 2020
We use cookies on our website to give you the most relevant experience by remembering your preferences and repeat visits. By clicking “Accept”, you consent to the use of ALL the cookies.
Cookie settingsACCEPT
Manage consent