Read the report on our recent consultation
Now & Next Menu
Jun 21, 2021 / Samuel Larochelle

After telling plenty of other people’s stories, 27-year-old Montreal filmmaker and screenwriter Jason Todd is finding his own voice, the one he can only partially hear without his hearing aids. In fact, it’s been coming in so loud and clear lately, that he’s on the cusp of being ready to tell his own story and share his unique perspective on the world.

Q: When I offered to write your profile in a series about filmmakers dealing with an extra challenge – like hearing impairment in your case – you were gung ho. But you did seem quite surprised that some people already knew you were partially deaf, since you’ve not been very outspoken on the subject. What gives?

Well, first of all, it took me and my family a long time to realize what was going on even though I was born hearing impaired. When a child is born this way, you usually know pretty soon that something’s wrong. They don’t have many friends, they’re introverted, and they get low marks in school. In my case, I was doing great. I finally realized I had a hearing problem near the end of elementary school and only got hearing aids just before I started middle school.

My parents were worried that I’d be bullied if I was different, so we tried to minimize how I looked by getting the tiniest skin-coloured devices. And because I had long hair, you could hardly tell. I had tons of friends, and no one knew I was hearing impaired. I didn’t want it to define me. I was even a bit ashamed of it in high school. It does sound dramatic I admit. If my mother were here, she’d say, “Come on! You’re doing just great!” And you know, she’d be right.

Q: When did you learn to love being different?

I’m just in the process, actually. I’ve stopped saying that my hearing impairment doesn’t define me simply because it partly does. I’m learning to embrace it, to own it, but that doesn’t mean it’s a fait accompli. Being able to talk about it is another step in the process.

Q: Are you excited about people reading this article and finding out more about you?

I can’t wait! I talked about it for the first time last summer. I was alone in my apartment for most of the pandemic since my girlfriend was working in Lower St. Lawrence. During the lockdown, I had all the time in the world to think about it and question myself on what I was experiencing. Sometime in July, La Presse published a piece on the impact mask wearing was having on the hearing impaired. It described my situation so perfectly that I shared how I felt on Facebook. Most of the people I knew had no idea. After that, they wanted to know more when they saw me. It felt good. And I finally wanted to talk about it.

Q: A former director with hearing loss told me that most people with his condition didn’t like to talk about it in the industry because they worried about doors being closed to them. Is that something you’re concerned about?

In a roundabout way. When I was a set technician, I thought I was underperforming. I thought I really wasn’t all there or wasn’t staying focused during long shooting days that sometimes lasted 12, 15, or 17 hours. Looking back, I realize that I was having a hard time dealing with all the noise on the set. I was always falling behind, because I couldn’t hear clearly. So, I finally decided that being a set technician wasn’t my cup of tea. Today, I’m in full control of most of my creative projects. I don’t have to depend on anyone else.

I mostly surround myself with people very close to me, who know my situation and have no problem with my saying, “Look at me when you’re talking to me.” Everyone’s cool with that.

Q: Let’s go down memory lane. When did you start making films?

I started making films in my backyard with my friends and my Canon Powershot camera. It would only let you shoot 30 seconds at a time. The first one was a superhero movie, and I was the star. It was called SuperBuzz because I had a sword like Buzz Lightyear’s in Toy Story. I quickly realized that I loved telling stories. When I was young, my mother encouraged me to read a lot. I also started writing short stories and comics early on. When they gave me a camera, I also realized that my imagination was very visually oriented. In any group project, my conversation invariably included frames and images.

Q: You studied film at Cégep Saint-Laurent, earned a certificate in screenwriting at UQÀM, and a bachelor’s degree in film at Université de Montréal. What stands out in your educational experience?

It confirmed my love of storytelling, but I had a hard time with the teamwork aspect of filmmaking. Whenever I was in a big group, it was tough following the conversation. When I couldn’t see those doing the talking, I couldn’t read their lips, obviously. Bits and pieces of the conversation would get lost in the background noise. On top of that, the profs were always pushing the importance of networking, making friends, and going to parties, which stressed me out more than anything.

Q: Did you become head of programming at the H264 short film distribution company just to get away from noisy sets?

I was looking for a job that would allow me to continue making contacts, to continue talking with everyone but in another way, without being a set technician. With a bit of research, I discovered that distributors were where the action is, dealing with festival teams, producers, directors, writers, theaters, and funding bodies. I worked there from 2018 to the end of 2020.

Q: You also launched the Fjord Films production company. The works you’ve shot so far include a short documentary, a short experimental film, a music video, and a short fiction film. How are the stories you’ve told or plan to tell influenced by your being hearing impaired?

I’ve never touched on the subject directly in anything I’ve done. To tell the truth, I never thought my story was worth telling. Any time I tried, I always ended up hitting a wall, so I told other people’s stories instead. During the pandemic, I realized that I never tell my stories because I thought they were quite dull. Since I was so busy sublimating everything relating to my deafness, there really wasn’t much of my real self left. By uncovering everything I’ve been trying to hide, I’m getting some of my real self back. It’s giving me a perspective I didn’t have before for the stories I’ll be telling in the future.

When I think about my stories, my first step is to take the hearing aids off. Since my deafness is on the mild side, I experience life in a fuzzy sort of way. I kind of like the fact that all the sounds aren’t crisp and sharp. They’re more like waves rolling around. Almost dreamlike and atmospheric, not unlike the films I make, I guess. I’m beginning to understand that it’s not all that humdrum to live with a more detached perspective. I’m hoping to explore this unique way of looking at things but I’m not quite there yet. One day I’d like to be able to say, “Yes, I am different from most people” and leave it at that. If we talk again in five years, I hope I can say, “I’m there.” I really feel it will happen once I find the stories I want to tell from that perspective.

Trailers: How to Tell Your Story in Two Minutes or Less 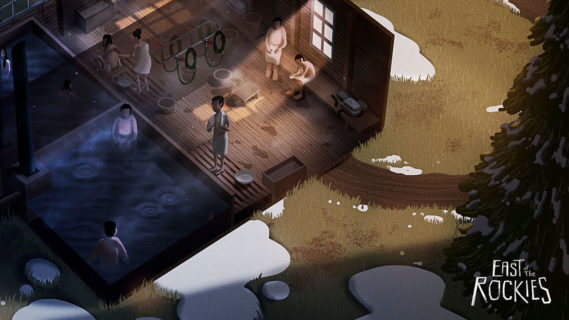 East of the Rockies: Augmented Reality to Tell History

This Hour Has 22 Minutes

Read more
Jul 16, 2019
We use cookies on our website to give you the most relevant experience by remembering your preferences and repeat visits. By clicking “Accept”, you consent to the use of ALL the cookies.
Cookie settingsACCEPT
Manage consent